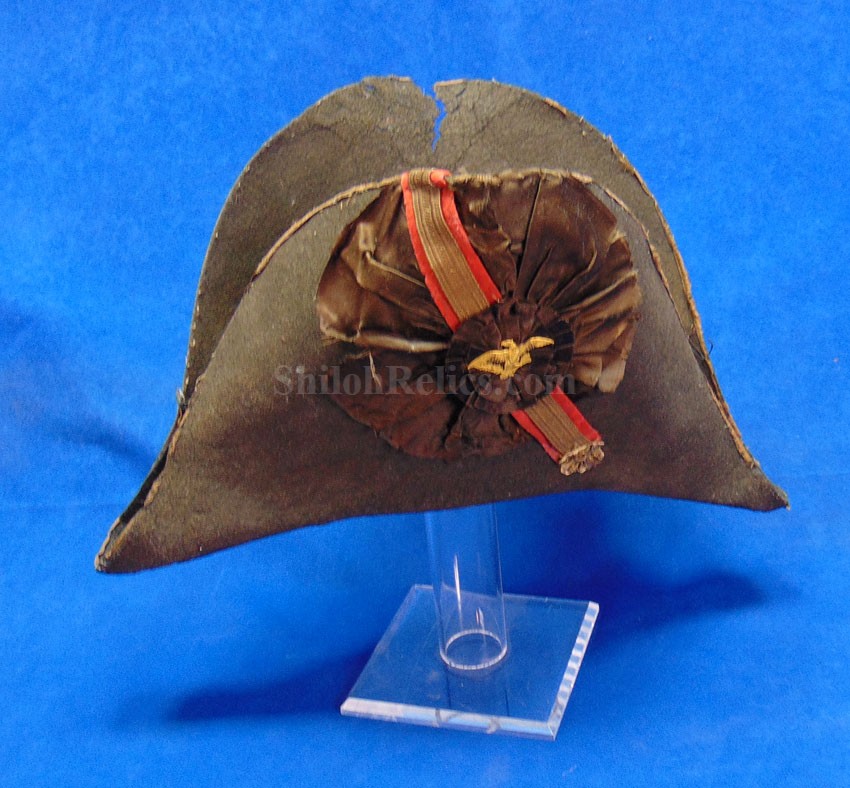 What the treasure trove this is! This is a fantastic archive of Company E of the 11thIllinois Cavalry from the Civil War.

This is the desk that was used by Capt. then Major Philip F. Elliott. Elliott was from Peoria, Illinois and enlisted as a First Lieut. of Company E of the 11thIllinois Cavalry on December 20, 1861. He honorably served with the regiment until he was mustered out on September 30, 1865 at Memphis, Tennessee. During that time he rose from first Lieut. to the rank of Capt. in 1864 in Major in March 1865.

The desk itself is made more like that of a strongbox rather than your regular traveling desk. It had to be heavily constructed to withstand the many miles of travel of the Civil War Cavalry unit.

The lid folds down to reveal a writing area that has the leather cover with the majority of the leather remaining.

The 11th Illinois Cavalry has a valiant fighting history during the Civil War. The records show that the 11th was recruited from the end from the counties of Peoria, Fulton, Tazwell, Woodford, Marshall, Stark, Knox, Anderson and Warren. 12 full companies were recruited into US service on the December 20th 1861.

They stayed at Camp Lyon until February 22, 1862 when they marched to Benton Barracks, Missouri. Their introduction to Civil War battle came during the Hell that was known as the Battle of Shiloh. They fought on both days of the battle of Shiloh losing many killed and wounded. After the battle they served in the fights in West Tennessee and North Mississippi. They were at the fights of Davis Bridge, Bolivar, Tennessee Corinth, Mississippi and Iuka, Mississippi. In the winter of 1862 they fought Gen. Nathan Bedford Forrest Cavalry in Jackson, Tennessee. It was one of the many engagements where they would fight the Confederate cavalry under the command of Gen. Forrest known as the "Wizard of the Saddle�. They fought forest at Lexington, Humboldt, Parker�s Crossroads and at Clifton, Tennessee.

Then they spent the majority of the rest of their service in Mississippi. Their engagements in that state included Canton, Mississippi the battle on the Big Black River, Vicksburg, Jackson and then Yazoo City, and Egypt, Mississippi. Then they were shipped by boat to Memphis, Tennessee where they mustered out on September 30, 1865.

The desk has the many small compartments for storing paper of various sizes and also has the single drawer which held the pens and other necessities. The drawer still contains some of the tips for the writing pens as well as the postwar obituary for Major Elliott. There is a small mourning card from Gen. Halleck�s wife in the compartment as well.

There are a few personal letters from Elliott and also three of his original Civil War commissions from the State of Illinois. These commissions are the ornate ones and have the signature of Gov. Yates.

The documents that are contained inside the desk give us a glimpse into all of the things needed to keep the Civil War mounted fighting regiment in the field. The receipts include everything from socks to horses to weapons.

It�s interesting to note that this regiment was armed with the Smith patent cavalry carbines and another notation tells us they had 36 caliber revolvers.

The receipts are on various sizes of paper with some being preprinted in some being all handwritten. There is even one receipt where he received the desk itself.

There are approximately 190 original documents included in the desk not even counting the commissions.

One paper that we found when we were looking through the desk is a Treasury Department letter dated 1892 in which Elliott was still trying to be paid for his services during the war. I guess the Government tried not to pay their bills even back then.

The desk and documents are accompanied by Xerox copies of the service history of Elliott as well as 11th Illinois Cavalry. There is even a reproduction copy of an image of Elliott.

You get the desk all of the documents including the three commissions for $6850. That�s less than $40 a piece for the documents and not figuring anything for the desk itself. This is a wonderful piece of history that is priced well enough for a quality investment on your part.